027: Tall, Dark and Handsome Has Nothing To Do With Herpes, with Alexandra Harbushka

Welcome to Life With Herpes, thanks for joining me on episode 27! This show is about busting stereotypes of who has herpes, and who gets herpes. Whether your “thing” is tall, dark and handsome or big breasts and an ass, none of that has anything to do with herpes!

Find out exactly what I’m talking about, and what my old misconceptions were about who can have herpes and who can’t get it on today’s edition of Life With Herpes.

The person I thought who would get herpes would be someone in line at the DMV or the carnival workers - just weird people. That is who I thought had herpes. I thought people with herpes were uneducated, of a lower socioeconomic class, and were couch potato-types. It's hard for me to admit these were my thoughts but I'm being totally transparent!

I also thought minorities and really promiscuous people were the only ones with herpes.

I never thought a tall, dark and handsome man would have it.

And that was one of my ah-ha moments: when I got herpes none of these notions mattered. I realized the herpes virus doesn't care if you are the most attractive person in the world with a PhD, the most powerful and influential CEO, or anyone of any variation in between.

My point in sharing this is I was wrong and naive - these stereotypes were my mind’s way of convincing myself that will never happen to me because I don't date certain types of people.

I want you to know that it doesn't matter. We have it. You have it, I have it, we have it. 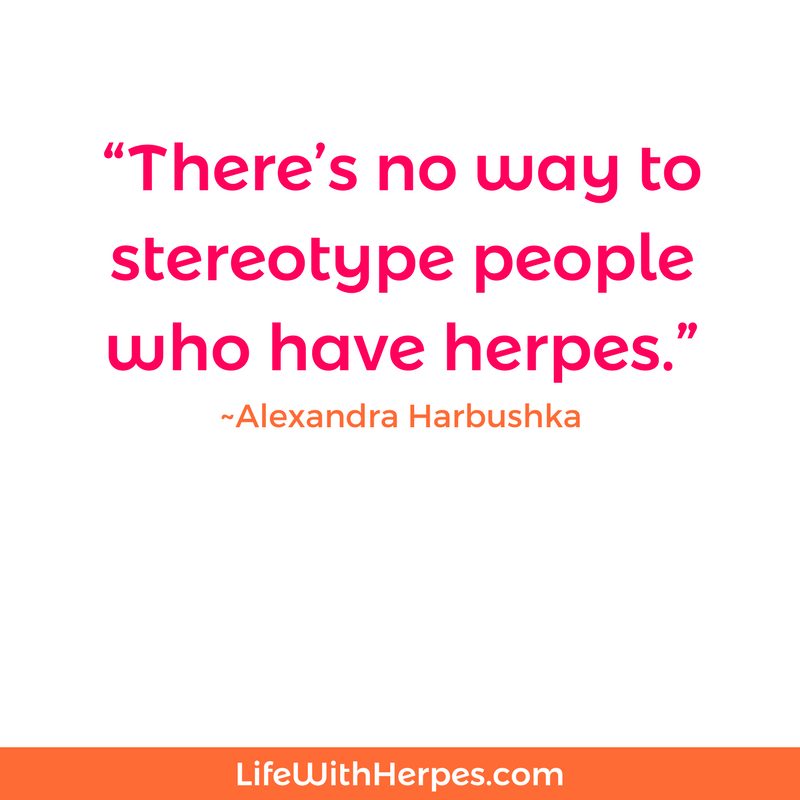 Tweetable:  “There’s no way to stereotype people who have herpes.” -

Getting the preconceived idea of who can have and who does have herpes is what we should all do. To this day one of my biggest pet peeves is when I tell someone I have herpes and I recommend they use condoms, they tell me they don't sleep with “dirty people” so they won't get it. Or they tell me they know the people they sleep with and they won't get it.

None of that matters! No one fits into any certain box of who will get it and who has it, I mean 70% of the population has HSV-1! And 1 out 6 sexually active adults has HSV-2.

There is no stereotype, there is no tall and dark and handsome who will protect you from getting it. There is no person out there who cannot give it to you because they aren't "dirty". We both know that just because you and I have herpes doesn't mean either of us is dirty.

I hope this helps you, maybe you had your own "ah ha" moment from today’s show. Perhaps you realized you were putting yourself in a certain stereotype because you have herpes, I'm here to tell you to get out of that! Don't think you are less of a person or you aren't deserving because you have herpes. That's BS - don't put yourself in that mindset because it isn’t true!

Now I’d love to hear from you: did you have a herpes stereotype or have you been putting yourself in one? Join our free, private community on Facebook and let me know after you’ve listened to all of episode 27 of Life With Herpes.