What It's like Being Married to Someone Who Has Herpes: Interview with Bill Gaylord 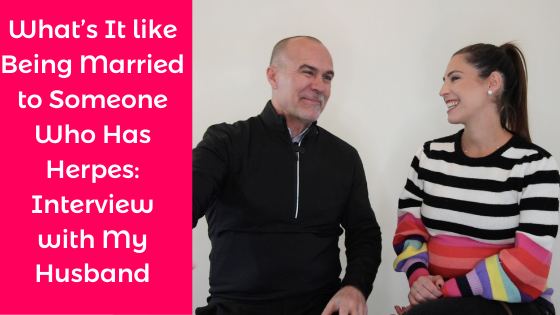 This was such a fun interview to do because I got to interview my favorite person in the world, my husband. Bill comes on the show and talks about his experience of what it’s like to be married to someone who has herpes. We get into what it was like when I disclosed to him, what it was like when we were dating and then now what it’s like being married.

I have Bill share his initial reaction to when I disclosed. He talks about how he really didn’t know anything about herpes and wanted to learn more about it. His number one concern was will having herpes shorten his life. And this is something that believe it or not I come across a ton in DM’s or questions in the Secret Society. People often confuse HSV with HIV and think that herpes is deadly. Just to clarify...HSV and HIV are two completely different viruses and herpes will not kill you, impact your health in any way nor will it shorten your life. All that herpes is is a skin disease.

One of the things I was curious about especially talking to someone who doesn’t have herpes was what was the stigma like for Bill?  He said that he knew about the stigma but his main question was how does the herpes virus impact his life. He wanted to know that it really doesn’t play a part in his life other than a possible bump here or there.  Bill just says that the stigma is far worse than what herpes really is and it should not impact you falling in love, having sex or deciding to marry someone.

One of the things that we think is a positive is because I get outbreaks I have to communicate to Bill what’s going on with my body. So in other words, we communicate about my outbreaks or lack there of. If I have an outbreak it doesn’t keep us from getting intimate it just requires us to find other ways to have sex.  Sex doesn’t have to mean traditional sex there are so many other ways to find intimacy and have fun. So what I have an outbreak.

Oh and just to clarify, Bill gets tested at least once a year if not twice a year and he still does not have HSV 1 or HSV 2. Why that is, well maybe it's because I don’t shed often or maybe some people just don’t get it. Honestly we’ll never know until we know. But for now he’s herpes free. Lucky duck...lol

One of the things that us, people with herpes, are self conscious about are if we’re looked at differently once we disclose. Like we have HERPES written on our forehead and that our partner will feel differently towards us or look at us differently. So I asked Bill if he looked at me differently once I told him I had herpes. Bill said that absolutely not and what he appreciated was that I was upfront and direct. He appreciated that I told him how I contracted it, when I contracted it, and what I was doing to prevent transmission as well as statistics and other medical information. That was really all he cared about. Not the fact that the person he was in love with had herpes.

When we first started dating I just got out of another relationship and in that previous relationship I was on the daily antiviral so that was something I continued to do for about a year or so. What was important to Bill was making sure that our relationship was solid and that we were going to move forward and plan to get married and be together. That was the deciding factor of me staying on the antiviral and getting off the antiviral. I think it was about two years into our relationship before I got off the daily antiviral and that was both of our decisions. It was important to me that Bill had a say in that because he was the one that would be affected by it.

At the end of the day Bill talks about how it’s okay if he gets herpes because he loves me and is okay. It just is what it is and so what if he gets herpes. It’s totally worth the reward and there’s no reason to no be with me or anyone you love because they have herpes.

Okay so if you want to read the entire interview I had it transcribed and you can go here to read it as well as listen to it.

Also, Bill’s going to be at our upcoming retreat so you can ask him personally any questions you have about what it’s like to be be married to someone with  herpes. What it was like dating someone with herpes and so on. To learn more about our retreat & book your seat go here.