How One Person Took Her Herpes Diagnosis from Devastation to Empowerment 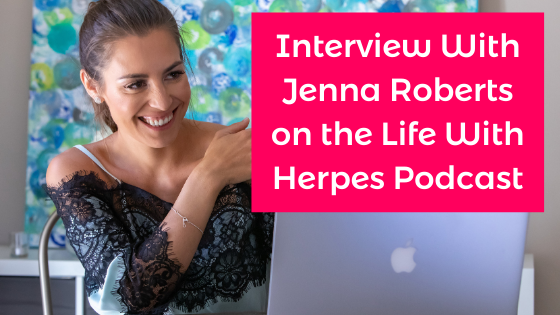 Interview with Jenna Roberts: our own Secret Society Member

Welcome to the Life With Herpes show. Today I sat down with one of our Life With Herpes Secret Society members, Jenna Roberts.  This was a huge deal for both of us and probably a bigger deal for Jenna. This is the first time I’ve had one of our community members on the show (yay) and this was Jenna’s way of stepping into her power and owning her herpes diagnosis!

Jenna talks about her herpes diagnosis and how she was emotionally devastated when she got the news from her doctor. She says she was mortified and filled with shame and embarrassment. In her mind there was no way she was ever going to get over this shameful secret and there was no way she’d ever be able to tell anyone that she has herpes. Jenna talks about how she tried to ignore that she had herpes by covering up her emotions which created a destructive lifestyle and the misery just continued to build.

There is a point in Jenna’s life where it all changes and she knew and decided to get out of her downward spiral. SHe knew that she was angry but knew she had two choices, to be angry or to get over it. You’ll have to listen to hear everything that she says and how she turned her animosity of a herpes diagnosis into feeling empowered that she has herpes.

One of the key things Jenna mentioned that when she started her path to recovery she was on her own but then soon realized that she needed a community for support. She was a googler and would google everything she could about herpes and realized that that wasn’t always a good idea. Jenna said that when she joined the Secret Society it was well into her recovery with herpes however there are still days and times that she needs the support. Not to mention how now being someone who’s lived with herpes for a while she can now support and help others in our community.

Listen to the Podcast Interview:

To Read the full transcript of her interview