You can get herpes without having sex, here’s how 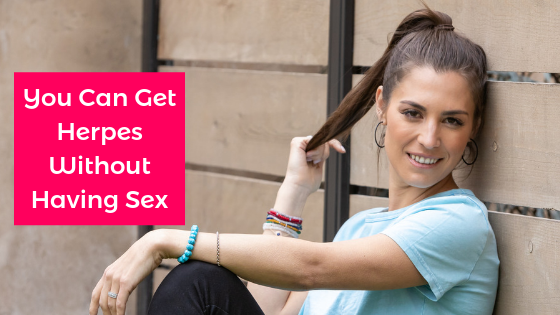 Sexual Ways You Can Transmit Herpes Other Than Sex

We’ve all heard the saying people talk about sexual diseases and don’t catch one. We’re taught in sex ed “or maybe we’re taught” that having sex can lead to STI’s, in our case herpes and other things. And so with that said we go out into the world and become sexually active and think that the only way we can get “something” is by having sex. The other big thing we’re told is that if you use a condom then you’re fine but that’s another whole topic.

So…today I want to talk about way’s herpes can be transmitted to protect you and you’re partners.

Before we go into the sexual ways herpes can be transmitted let's do a little breakdown on why and how herpes is transmitted.

Also if you want to get the full deets on herpes you can click here.

Herpes is a virus and it’s skin to skin transmission. So, in other words, you catch herpes from touching someone else who has the herpes virus. Don’t freak out, this does not mean that if you touch someone you’ll immediately get herpes or if you have herpes you can never have human contact again. What it means is if you touch someone in the area that the person is infected in then you’re at a pretty high risk of contracting the herpes virus.

So for example, if you have genital herpes and you hug someone then you are not at risk of transmitting herpes. Unless, of course, you used your genitals to hug someone...lol. So does that make sense?

Here’s another example, if you have oral herpes and you have sex with someone and don’t kiss them then the person is not at risk of getting herpes.

Let’s look at other sexual ways you can transmit herpes

Ok so most of us don’t think that STI’s or STD’s can be transmitted with oral sex. But the truth is it can. In fact, herpes, chlamydia, gonorrhea, syphilis, HPV, and hepatitis b can be transmitted through oral sex, the only thing that’s 100% not possible is pregnancy. What this means is oral sex is not a great solution to not having a condom or an easy way to “not have the conversation” about safe sex. Oral sex transmission is just as probable as vaginal sex. THere’s a lot of new herpes cases that pop up from just having oral sex.

I looked up the definition of foreplay and basically to get to the point its, sexual behavior that proceeds sexual intercourse. What does that mean or what does that cover? That means that there’s touching! Whatever you and your partner want to do during foreplay is up to you but my guess is that there’s some type of skin to skin contact and I’d say the majority of the time there’s no condom or protection being used. So just because you’re not having “sex” you’re not out of the woods. Herpes can still be transmitted.

What I’m trying to get across is a couple of things. 1) just having sex doesn’t transmit herpes 2) you really need to communicate with your partner about having herpes 3) please don’t let this stop you from having skin to skin contact or be afraid of touching your partner.

By communicating with your partner you guys can talk about what you both feel comfortable with. When couples are in communication about having herpes it makes it so much easier to prevent transmission.

Back to this communication thing, and condoms and not telling your partner, I think I’ve painted a picture of how herpes can be transmitted even with using a condom. Because say you used a condom but didn’t use if during foreplay...boom that was skin to skin.

Oh yea, remember to subscribe to the Life With Herpes newsletter and get The 5 things  I wished she knew before I was diagnosed with herpes sent directly to your inbox + weekly updates.

Learn about the Herpes Outbreak Toolkit:

Need to talk confidentially about herpes?

Oh Yea and in case you need Herpes Outbreak Essentials