056: The Truth About Herpes And Other STIs with Jenelle Pierce

What you wish you could tell your teenage self about herpes

Welcome to episode 56 of Life With Herpes! Today we have a very special guest, Jenelle Pierce. Jenelle is the Founder of The STDProject.com , and the Spokesperson for PositiveSignals.com. She stays current in the field of sexual health and STDs by being an active member or chairperson in numerous other organizations. Jenelle also been featured in many well-known publications like Cosmopolitan, Forbes, Jezebel, NPR, HuffPost Live, xoJane, SELF and Refinery 29. Together we talk about how and why she became an STD expert and founded The STD Project, how to talk about having herpes with your potential partner, and how many people will get an STD in their lifetime (it’s a LOT more than you might think!). Join us for this fascinating and in-depth look into the world of STDs and sexual health on episode 56 of Life With Herpes.

Jenelle and I share something in common, something we probably share with you too: we have genital herpes. When she was 16 she had her first outbreak. It showed up on her vulva (the external part of the vagina) and when it didn’t go away after a few days she showed her mom.

Her mom took her to the doctor, Jenelle’s general practitioner in their conservative small town. He took one look at Jenelle's outbreak, said he needed to take a swab and did so. After, he came back and told her she had herpes and it was the worst case he had ever seen.

He gave her a prescription and that was it. He didn't give her any additional resources or reassure her in any way. The way he treated her paved the way for how she felt about herself for having herpes. Immediately she remembers what she has heard about people with herpes: only sluts get herpes, only whores get herpes, etc.

Jenelle really thought no one would ever love her again, she thought her life was over.

She was uninformed and didn't know how to think otherwise about her situation, and went on a downward emotional spiral.

It was made even worse after Jenelle told her best friend, who obviously wasn't a very good friend at all because she told other people. The rumor mill went into full tilt and soon it felt like everyone knew Jenelle had herpes. High school kids can be cruel and her friends were no exception. For instance, they made her sleep on the floor at slumber parties because they thought they were going to contract herpes if they slept in a bed with her.

This just exasperated her emotional state; for a long time she believed she deserved it. She thought she was being punished by God for having sex outside of marriage. She felt guilty; she thought she had done the responsible thing by getting on birth control but she didn't know the full extent of the risks involved when she became sexually active.

Today she knows the truth: once you become sexually active your risk of contracting an STI is very high, and the majority of people will have one at some point in their lives. In fact, over 80% of all people by the age of 50 will have had HPV at some point in their lives! And that's just one infection, there are 30+ other infections out there you can contract through sexual activity.

The majority of people will contract some kind of STI in their lifetime; some of the STIs heal on their own before we even know we have them but we still have had one. 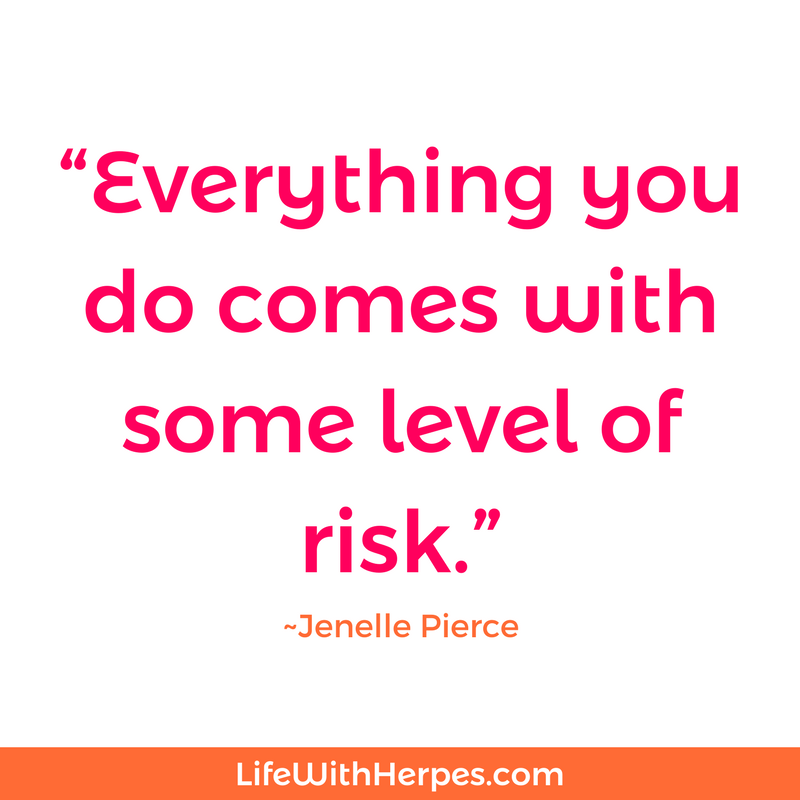 Jenelle says once you start learning more about the world of sexually transmitted infections and how prevalent they are your mind will be blown, especially if you have ever felt alone, stigmatized or ostracized because you had an STI. And that's why she started The STD Project - to help others out there who don't know any of these facts and suffer because of it. She wants to provide others with the resources and reassurance she never had when she was diagnosed with herpes.

I also asked Jenelle to talk about how to get past the fear of telling a potential partner you have herpes. We have both had similar experiences when telling partners: no one shamed us for it, or made a big deal out of it.

But from so many of you listening I hear you are scared to date, and scared to tell a potential partner for fear of rejection. I asked Jenelle what advice she would give and she said when you are talking about rejection we have to look at it this way: people get rejected for any number of reasons, and we often don't know why (especially when it's dating).

So if you do disclose that you have herpes to someone and they reject you at that time (and rejection hurts no matter when it happens), it just means they aren't ready for the risk. It's their right to decide they just don't want to go down that road right now, but it has nothing to do with how hot you are, how much money you make or any of those other things that you may think.

She also explains how this conversation can help you get closer to the right potential partner, why it’s okay to acknowledge the topic is awkward to talk about and why you’ll learn from the experience no matter the outcome.

Today we also cover how HPV came to be so easily acceptable in the public eye even though it is an STI, and we wrap up with a discussion about why it's so important to educate yourself. Join us to hear those conversations and more on today’s episode of Life With Herpes.

Here is a picture of Jenell and me podcasting! And yes, those are pillows all around me. It helps with the sound quality :-) 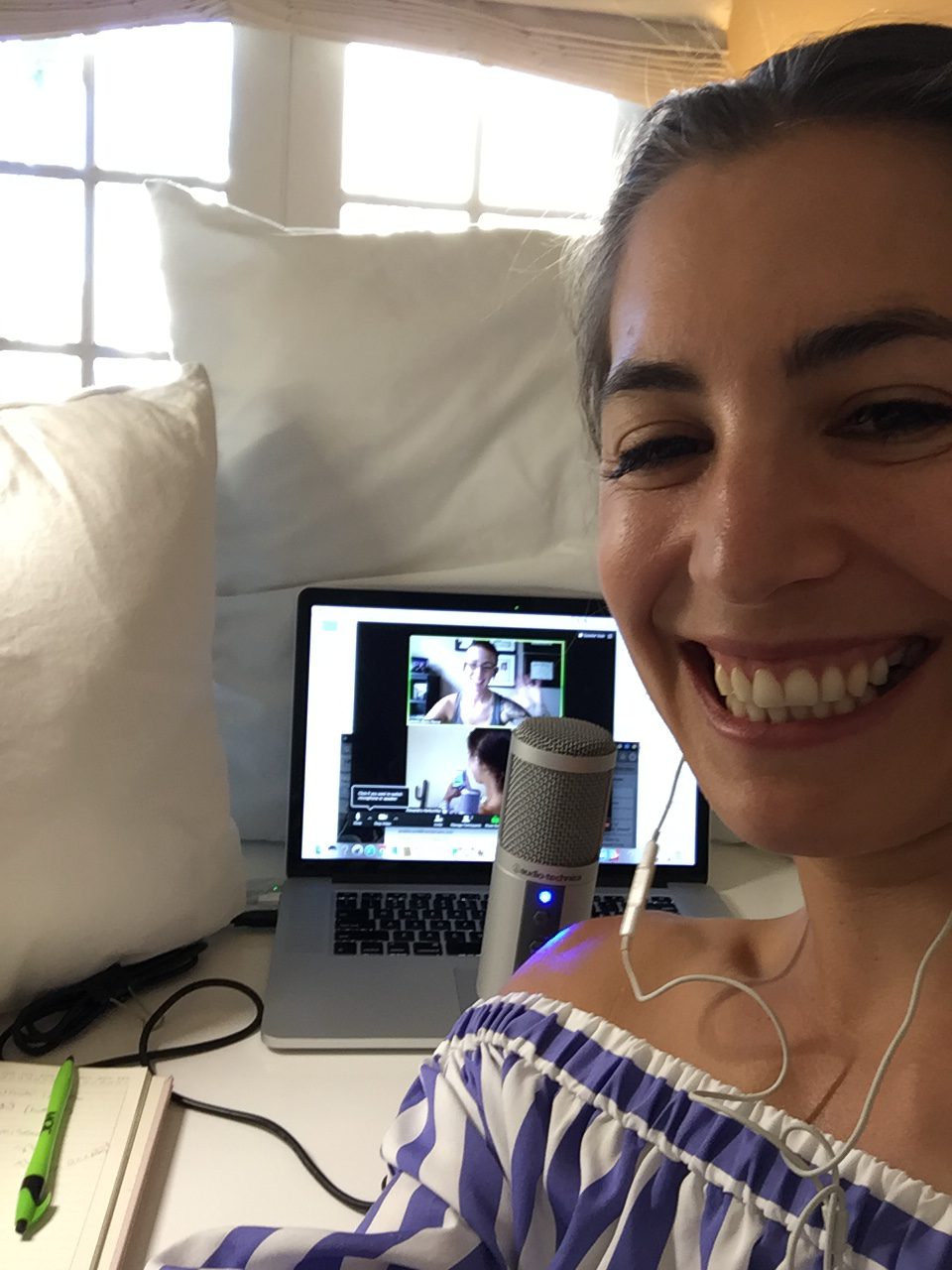 Keep in touch with Alexandra Harbushka

If you are ready to join a community of people who are living with herpes also then you will want to join our slack group. It is FREE and it is a great way to find the support and comfort that you are looking for. Head on over to www.lifewithherpes.com and join our community. You will receive a slack invitation as soon as you sign up. See you in there.

Ways you can support the Life With Herpes show

And if you enjoyed listening to this episode as much as we enjoyed making it for you, please give the Life With Herpes show a review. It is a way to pay it forward to fellow friends who are living with herpes. You can Subscribe, Rate and Review the show through your iTunes app or on the desktop. Seriously, it helps out a lot more than it is a hassle for you. You see, iTunes has an algorithm that organically promotes the show, so the more ratings, and reviews the Life With Herpes Show receives then the higher it gets ranked. This is your way of paying it forward and helping someone find the show who really needs it. Oh, and you can totally use a fake name, so don’t worry about a friend finding you on the iTunes review. Talking about herpes needs to be spread as far and wide as possible. You are totally a part of this movement so THANK YOU!  Subscribe, Rate and Review