030: I Almost Got Herpes, with Alexandra Harbushka

The herpes virus is promiscuous

Welcome to episode 30 of Life With Herpes! I'm honored you are here and grateful for the time we have together. There are so many of you from around the world and I am thrilled you want to learn and know the facts about herpes, thank you for being here.

Today I want to tell you a story about the phrase “I almost got herpes”; I'm sure you'll laugh when you hear it so tune in for episode 30 of Life With Herpes!

Obviously you and I both have herpes, it's why we are here. We know how easy it is transmit it, we know the deal and we know what is what about herpes. But the people in this story I’m going to share with you today did not! The names have been changed, but let’s call these two Tom and Amy.

I was talking to Tom about 7 or 8 years ago, here in La Jolla (it’s one of the beach communities in San Diego). We were at a place called The Living Room; it’s a coffee house on the first floor and on the second floor is a hookah lounge.

So we were there to smoke a hookah, and they give you a protective covering for the hookah so when you pass the hookah you don't pass any of your germs or diseases (like herpes). Tom asked me if I knew what the protection was for and I said no. He said it's for herpes. Then he continued on to tell me he almost got herpes. He literally said to me: “you know I almost got herpes.” And I wanted him to tell me how, which he did.

Now in full disclosure this was before I knew all that I know today, I still had my own stereotypes about who would and could get herpes.

Tweetable:  “The herpes virus is promiscuous, not the person who carries it.” Alexandra Harbushka 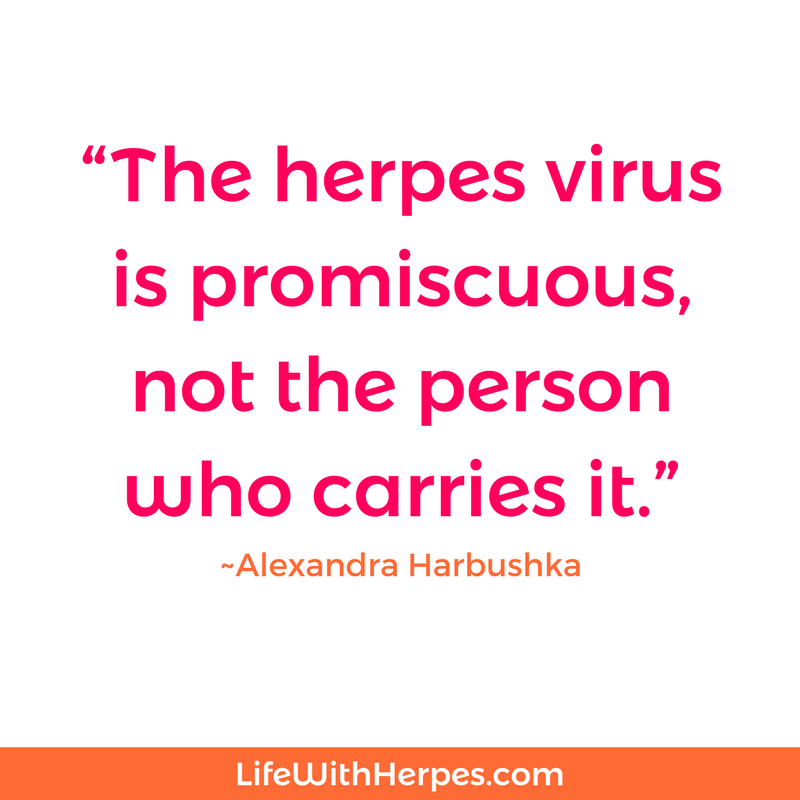 As I was thinking about this story years later when I have herpes, I realized that phrase he used - "I almost got herpes" - is a phrase everyone should use every time they have sex, not just when they hook up with someone who has it.

I think the only time you know you're in the clear is if you know you are in a 100% monogamous relationship and you know 100% neither of you has HSV-1 and HSV-2. Because you can almost always get it I say the virus is promiscuous! It is ready to go at any time and in any body and any host that will accept it.

I thought of this because I want to share personal stories with you, and this one came to mind. Thinking back on that moment I wish I could go back and say to Tom - you mean every time you slept with somebody you almost got herpes! Now I want to hear from you: has anyone told you they almost got herpes? What are your thoughts? Join us in the private Facebook group and let me know, after you’ve heard episode 30 of Life With Herpes.