023: Babe, I Have Herpes with Alexandra Harbushka

Welcome to episode 23 of Life With Herpes! I’m really excited, as always, to be with you today. While none of us likes having herpes I do love having these conversations with you so I’m glad you’re here to join in.

Today we’re talking about having the herpes talk with your partner. You’ll hear some of my personal stories as well as my fears and how I let go of the negative thoughts and beliefs I had when I was first diagnosed. This episode, like all of the others, comes straight from my heart to yours. Thanks for joining me on this edition of Life With Herpes.

Because it's important for me to be transparent with you I'm going to share my stories on this show. I’ll talk with you about what it was like to tell past boyfriends that I have herpes.

Personally, this was always one of my biggest fears: after I was diagnosed I thought no one would ever want to be with me again. I thought no one would date me and everyone would think I was dirty for having herpes. It took a lot of work for me to let go of those thoughts and beliefs! And while it didn't happen overnight, it did happen with a lot of self-love.

I can imagine you might be dealing with a similar fear so I'm taking the time on this episode of Life With Herpes to talk about my experiences having the "babe I've got herpes" conversations.

After I broke up with the guy I was dating who had herpes, I got to a point where I thought okay I've got to move on and date again. I knew I was not going to let herpes get in the way. As hard as it was to accept having herpes, I really took on the belief that if someone doesn't want to love me because I have herpes then that person doesn't deserve my time, my attention, my affections!

I believed they didn’t deserve anything to do with me or me if they weren't going to love me for everything about me. I’d say it took me about two years to get to that phase so I want you to know it is possible and you can get there too.

But that doesn't make it any easier to have the herpes conversation with someone you are dating. I have two specific examples of having this talk with someone, here’s the first one:

I went on a date with a guy I had known for awhile. He had asked me out a few years prior but I didn't want to go out with him then. But when he asked me out again I said yes, even though I had no interest in him really.

We went out on a romantic date, he took me to a nice restaurant in Little Italy in San Diego. I knew he was ready for sex, which I completely understood his perspective. However, I was not. To be totally honest with you, I used the fact that I have herpes as a way to not sleep with him. It was my scapegoat!

At the time it was easier for me to say you don't want to sleep with me because I have herpes, rather than telling him he's a nice guy but it wasn't going to work out between us because I didn’t feel that way about him.

Tweetable:  “I’m not going to let herpes get in the way.” - Alexandra Harbushka 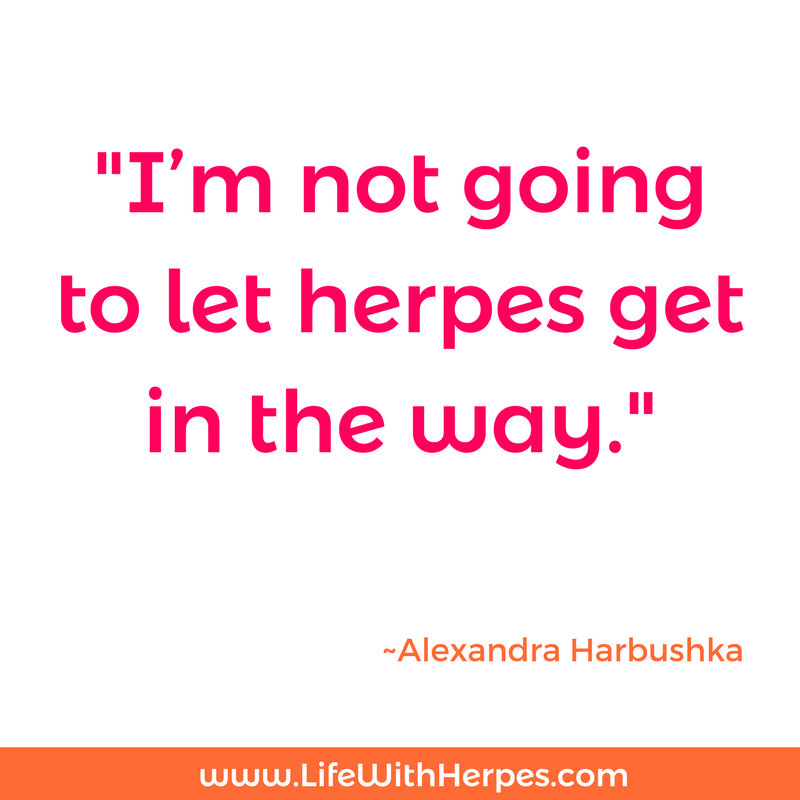 Then there was someone I found very hard to have the herpes talk with. I was dating a guy for about 3 months and I really liked him and he liked me. We were friends first and had known each other for awhile.

We even went through the phase of spending time together and wondering whether it was a date or not! We did reach a point there when I decided to tell him, it only seemed fair. We went to dinner and I told him during our meal. I told him I had herpes and that it was something he was going to have to understand if he wanted to take things further with me.

I was shaking I was so scared to tell him! I knew he could reject me and even though I told myself that was okay if he did because it meant he didn't really love me and didn't deserve me, I was still afraid to tell him. Fortunately, after I told him he responded with kindness and comfort.

By sharing these stories with you what I'm trying to say is it is all in how you share your message. If you use it as an escape from sleeping with someone, that's what you'll get back. If you share it from your heart and tell the person how you're feeling chances are you're going to get the same in return.

I believe there’s also an ideal time to have the conversation with someone you’re seeing, join me to hear it! And listen in to hear how I told my fiance and how it's impacted our relationship on today’s 23rd episode of Life With Herpes!